Octave on his real name Octavian Teodorescu (born January 29, 1963) is a Romanian vanguardist musician, composer, orchestrator, songwriter, music producer, performer, instrumentist (guitars, keyboards, programmable instruments) from Bucharest, Romania. Pioneer of Electronic Sound and using of the computers and synthesizers in music in Romania, ardent supporter of the Romanian Rock Movement, promoter of the early Internet Multimedia Phenomenon and its implications as medium in music. His music is identified as a unique Electronic Symphonic Rock synthesis with multiple nuances from AOR till Progress presented in a homogeneous extreme processed and complex form with Science Fiction futuristic touch.

His first mainstream success was the 1992 album "The Secret Of Pyramids", part of a trilogy which also include 1993 "At The Gates Of Love" and 1994 "Sweet Freedom". The whole Work (102 minutes) appears unified on a double CD (the first of this kind in Romania) in 1995. It follows 1996 "They Used To Call Him The Dreamer" an Album wich was concepted (like novelty for its time) exclusively using computers and synthesizers. He was the first romanian artist who believed in Computer like Musicinstrument and its facilities to promote music online (1997), the first one who released a Multimedia CD-ROM and and an Internet Project named "Free Music Online" in 1999. He was also the first one in Romania who imposed with succes a instrumental music style like mainstream despite of the non standard commercial format.

The information from here comes largely from the Octave Multimedia CD-ROM freely distributed in 1999, an event designed to point the transfer of all his artistic activity in the Internet as a project called Free Music Online, which unfortunately was not continued. Other information and updates come from the Octave old pages during 1996 - 2000 presented as printscreen below. From Octave network pages it remained only one active http://octave.rdsnet.ro / like a watercolor in time. Since then the Internet evolved (or devolved) a lot.

There are some kind of music that shows its value because of the passage of time like the old wine gathers aroma and strength barely over the years. Listening you are inclined to believe that such a music is valuable precisely because it was created yesterday and not today, and was lived intensely staring into the future. Octave did in many ways pioneering work in Romania, he was a sincere spot of color in the Romanian postrevolutionary cultural landscape, often characterized by the social "gray" of a country that seeks its values to replace those which just were shot down by a revolution which came too rapidly for longer leave room for reason in hasty actions of "decimation" of old concepts like artistic essence, aesthetic, artistic message. Because many people hardly knew where to start, the Romanians found themselves gradually excessive suffocated  from  the subcultural stridency which pollutes the contemporary Romanian spirituality.

It has been talked much about about "the art of tray" after the '90 years. That art which could not manifested because of the communist censorship. The Rock music was such a "Cinderella". It was found but with amazement that the people who actually took advantage of the freedom, took advantage rather of the created chaos of its wrong understanding. Octave was one of the few names after 89 who confirmed that they understood the freedom as a spiritual unchaining first and not just to resume himself to "the freedom of senses" only. His albums have a concept, the names of the songs give rise to think, it exist substance, form and artistic content. The theme abound not in trendy social clichés, has not the lampoon air as many of the creations from today. The current Romanian cultural "circus" is often presented as art. The "soaping" of the visual media suggest the idea of "happiness", fun. Superb! But where is room for art, poetry in all this story? To reduce art to "fun" (entertainment as it today oft says) made ​​by force seems rather useful for politicians than to the nation itself.

The page here is an attempt to put together the materials gathered over time about Octave the artist and the man to draw better the traces of his unique creativity and personality in the Romanian rock landscape often dominated by monotony, lack of ideas, pro-Western mimicry or obsolete Balkanism to the other pole.

For many who know who is involved, the page can have the sense of reliving the past that continue to tends with courage "towards plus infinite." For those who do not know (the younger generation), can be an invitation to explore a universe of a new sound for the ear and soul. Studying the page you will discover more. The articles from the press give the perfume of the tumultuous era when the Romanians rediscovered the ABC of the freedom of expression. Comparing with the media today you will find great gains in coloring but unfortunately it was lost something essential: the content. Hence starting from here, look at what Octave wanted to say through his music. Last Octave official interview was titled: "His music begins where the words end." 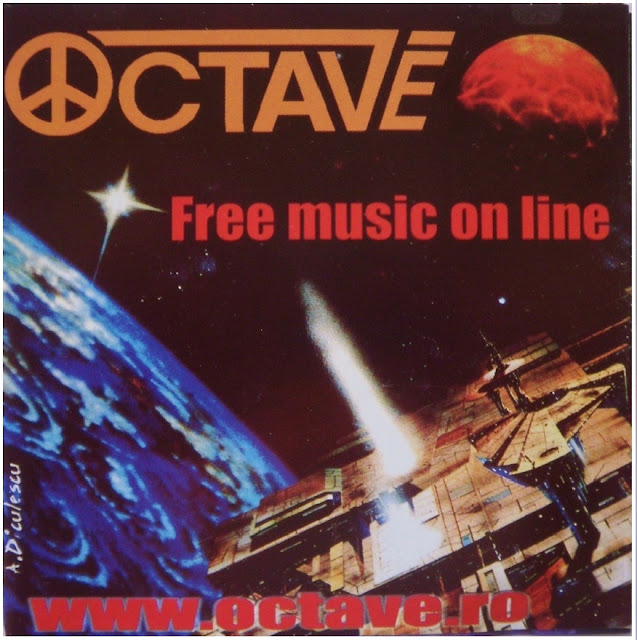 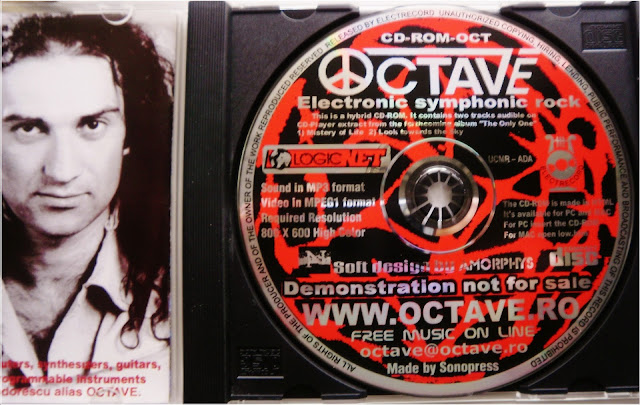 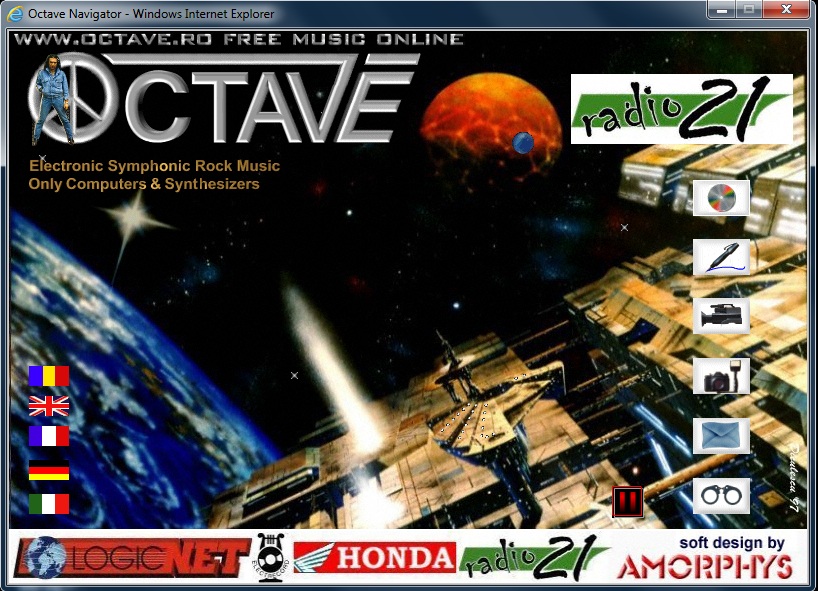 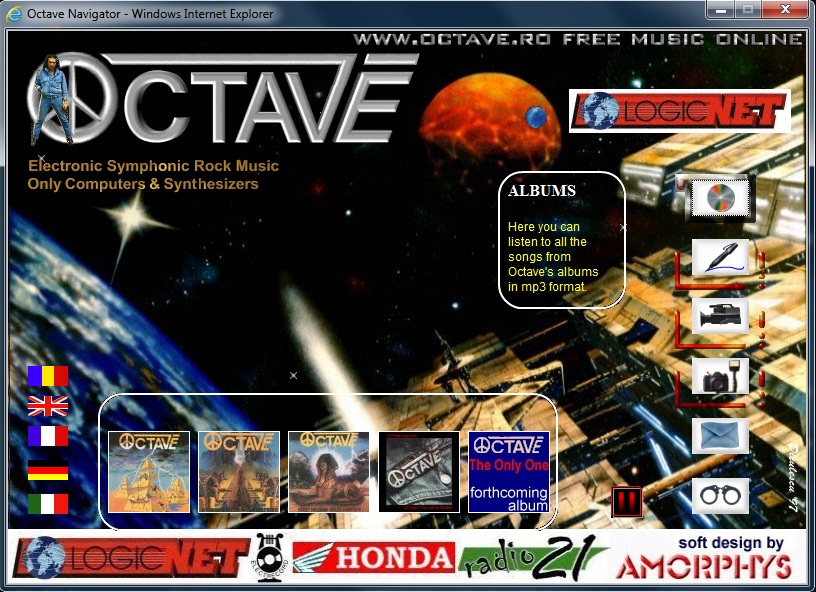 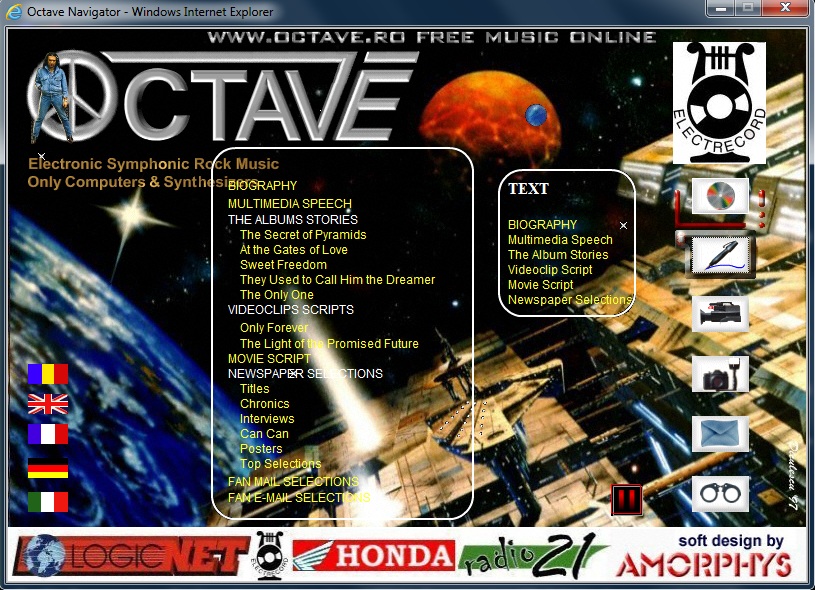 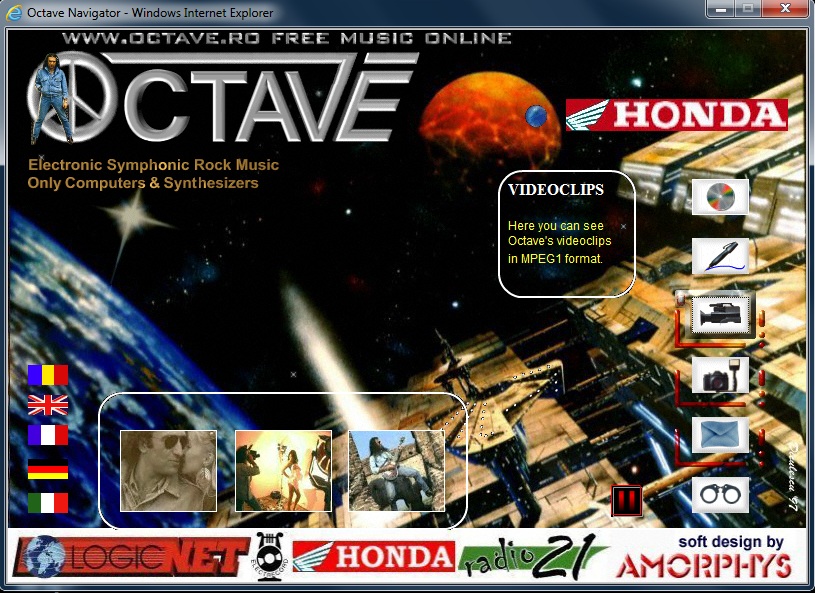 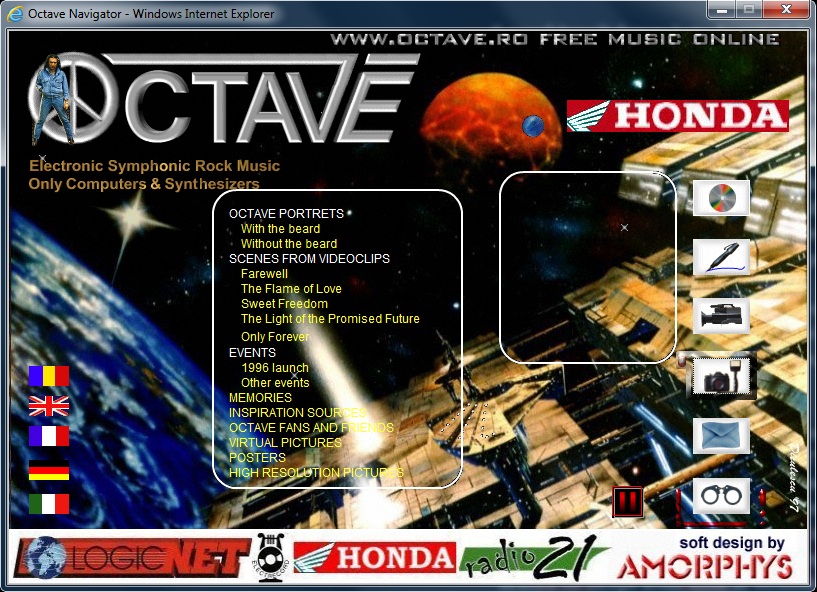 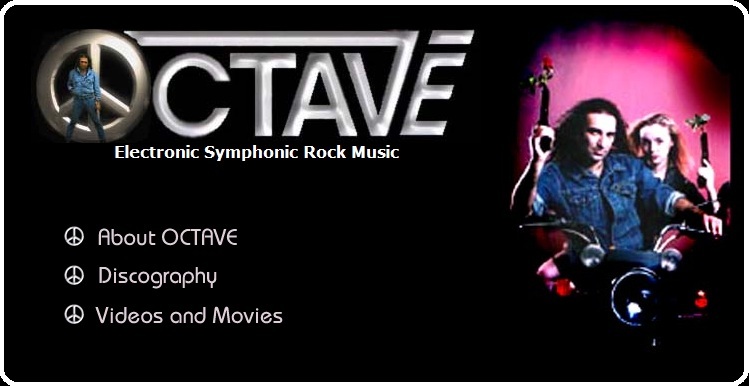 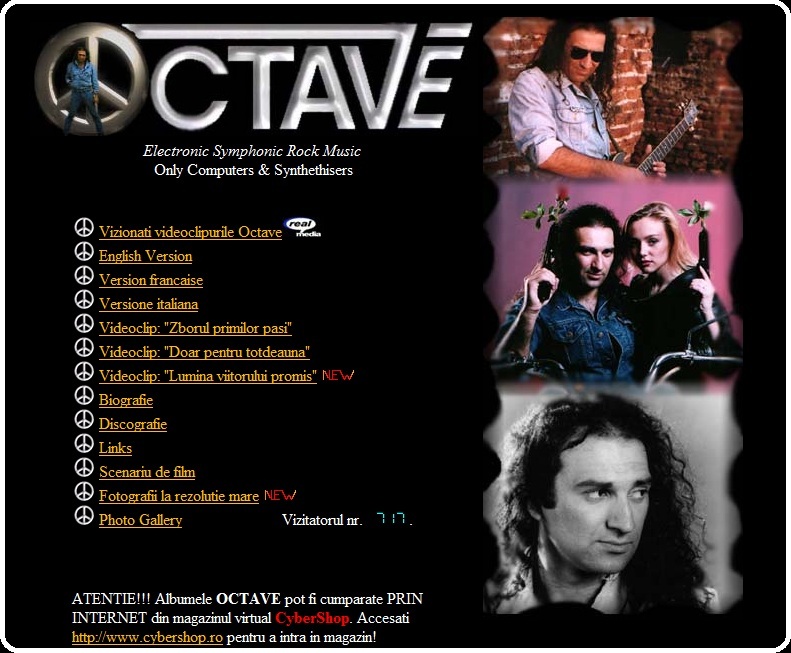 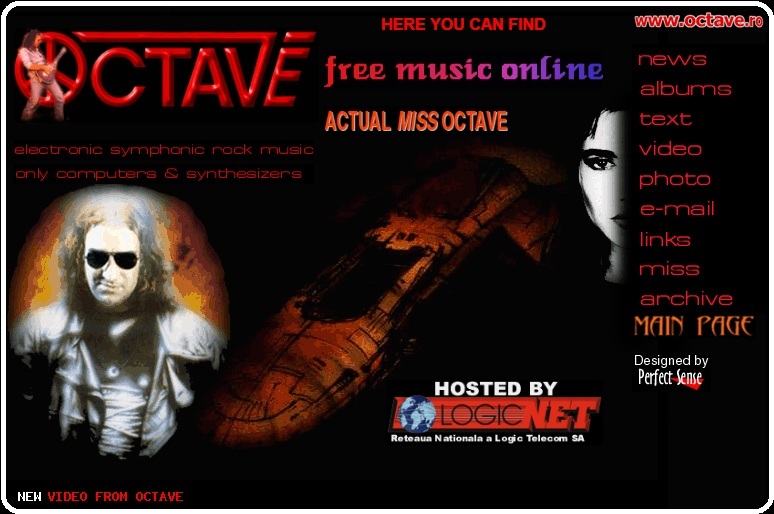 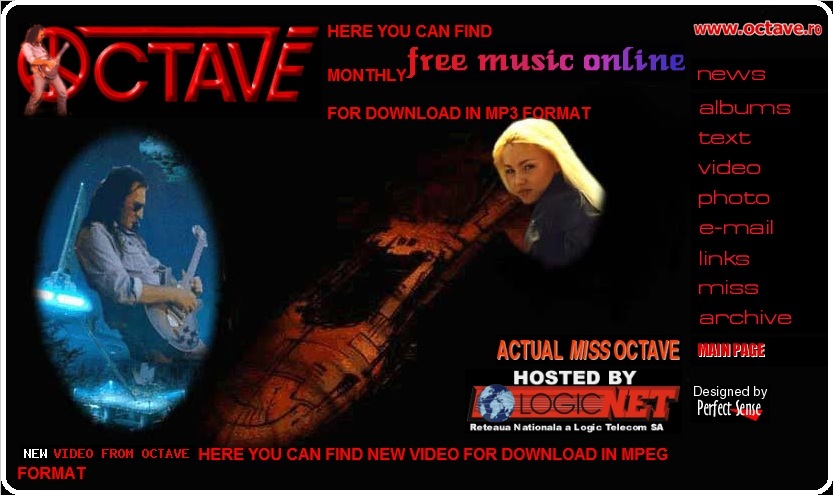 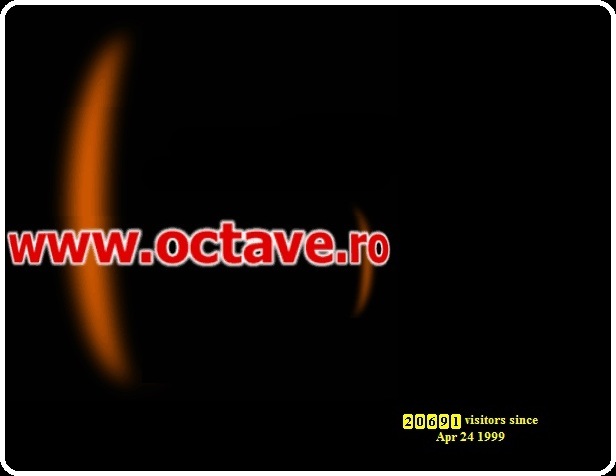 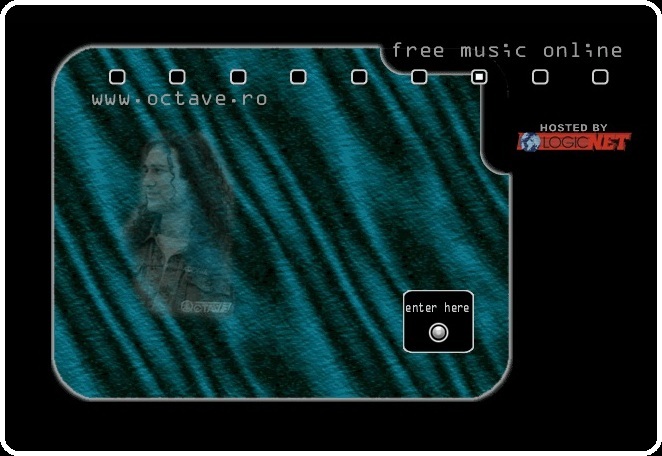 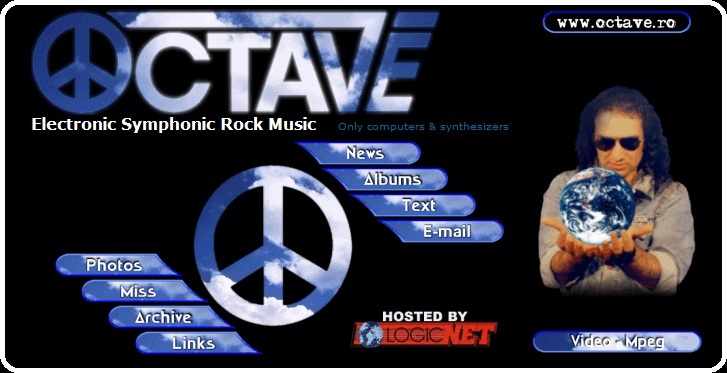 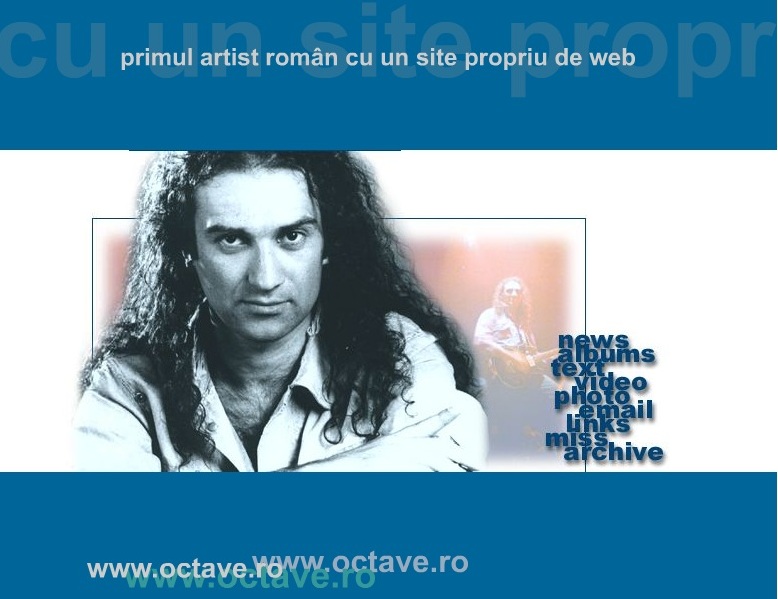 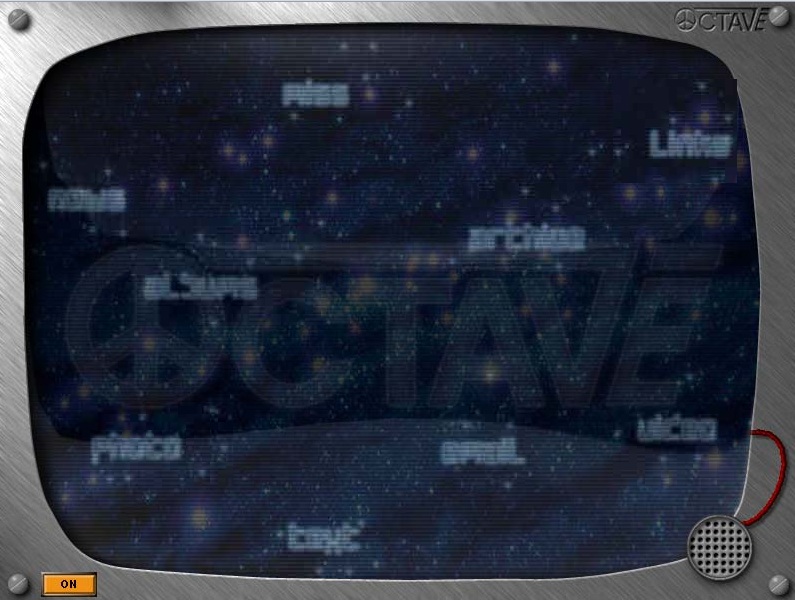 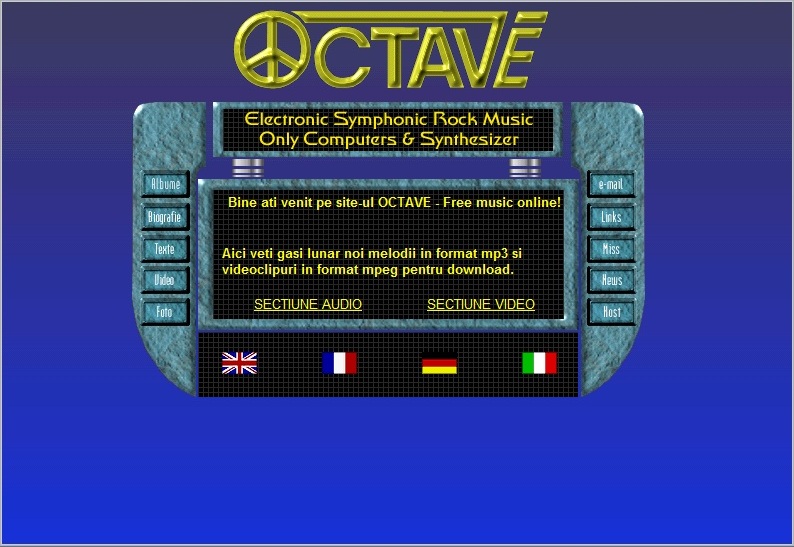 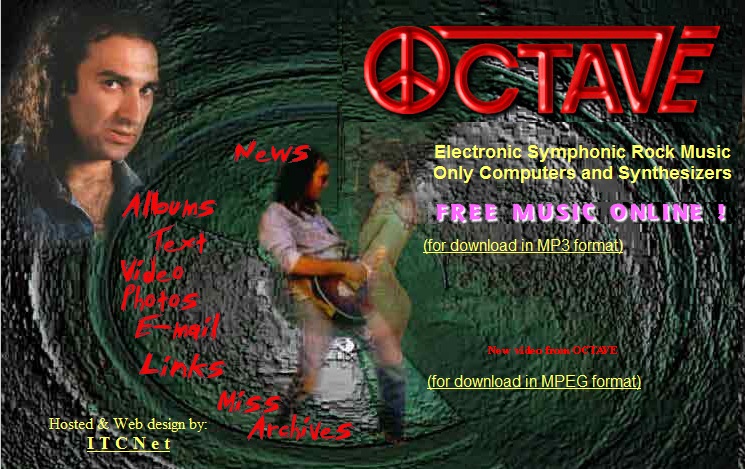 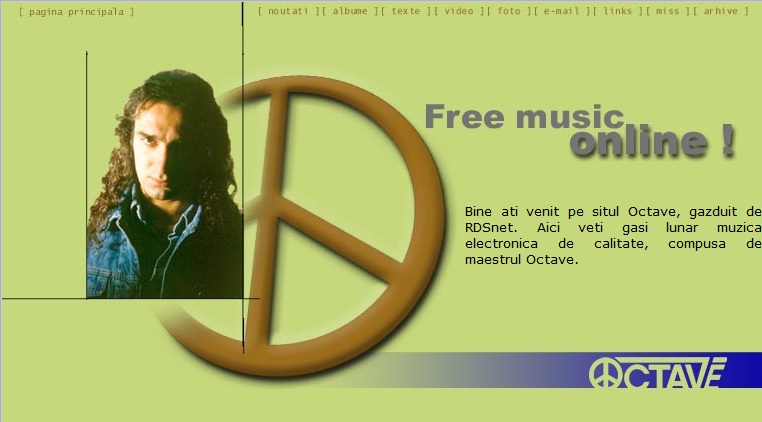